See what I did there? I titled this post 'Changing Tombs' with a nod in the direction of the interior design programme 'Changing Rooms'. You may or may not remember this tv programme, where celebrity 'fop' Laurence Llewellyn-Bowen minced about in his lacy-sleeved shirts, flicking back his long flowing locks, and redecorating people's living rooms with red walls and zebra print sofas so they could come back in and break down and cry on camera because he had made such a hideous mess of their living room!
So the announcement was made last week about the suggested design for the new tomb of Richard III in Leicester Cathedral. Thankfully not designed by Laurence (Phew!), but seemingly creating just as much controversy as his exclusive 'designer' interiors on Changing Rooms.

Personally I kind of like it, although at the risk of sounding a little like Larry L-B, my biggest criticism is the clash of colours of the stone tomb with the black/white rose floor inlay. The surrounding floor pattern also doesn't really help. I do like the idea of some kind of white rose floor plinth, although the black edging with writing around reminds me a little of the American seal of office.
I am sure Richard, as a very pious man, would have approved of a cross on his tomb. 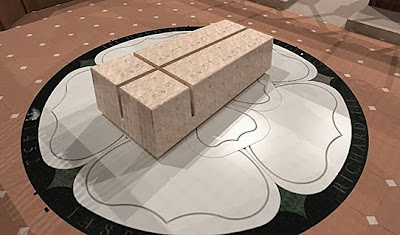 However, as expected, you can't please all of the people all of the time. And sure enough there has been a huge amount of negative feedback from some people who think it is 'too modern', 'too plain', 'too deeply etched', 'too square', 'too much like a brick', 'too much like a slab of nougat'!  Hmmm...
Of course there was an alternative design, originally commissioned by the Richard III Society, and apparently designed by two of its members. And it would appear that it is still the more popular design in some quarters. For me personally, it is a little too 'busy'. The designers have tried to get everything associated with Richard on there...White rose of York? Check. Boar badge? Check.  Motto? Check. Name, both Richard III and Richard Plantagenet? Check. Dates of birth to death? Check. Religious crosses? Check. Titles of King of England and Duke of Gloucester? Check. Coat of Arms? Check. Oh, and to make it a bit more special, some gold on it? Check. And so on and so forth... 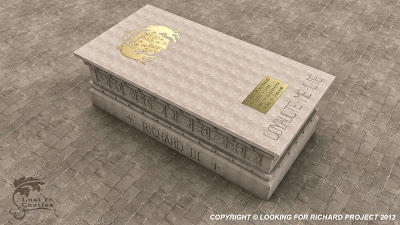 There are other people who would argue that Richard himself would have expected, and most likely wanted, an 'effigy' tomb, which was the designer tomb of choice in those days. 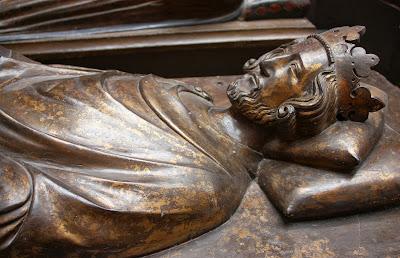 Cast of the effigy of Henry III in Westminster Abbey, c. 1272

Of course the truth is that, to our knowledge, Richard never made any decisions about his tomb, or indeed where he wanted to be buried (contrary to some recent opinions voiced on this subject). In fact, he rode out in his final cavalry charge knowing that, if he was not successful in killing Henry Tudor and thus ending the battle and challenge to his throne, he was likely to be killed himself. He would have known that he would then be at the mercy of Henry to bury him where he felt fit - which as it happened was the Greyfriars Friary in Leicester.
As a very brave and loyal warrior king, I am sure Richard would have been just as proud to have been buried right there with his men on the battlefield of Bosworth.

In the end, I am sure whatever design is finally chosen it will look suitably impressive in Leicester Cathedral, hopefully where Richard III will be laid to rest, just a matter of yards from his original medieval grave site. The Cathedral have already gone to great expense and disruption to provide a beautiful and fitting space in the Chancel, almost exactly where the Richard III commemorative ledger stone lays now, and Richard will be afforded a magnificent, dignified, religious reinterment ceremony befitting a former King of England, and then left finally to rest in peace. Surely we can all agree about that? 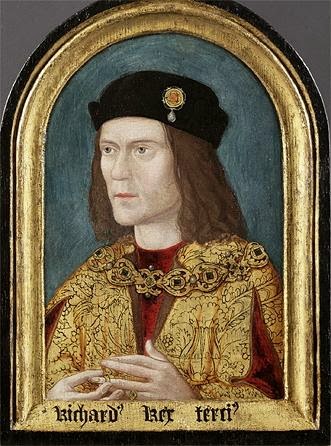